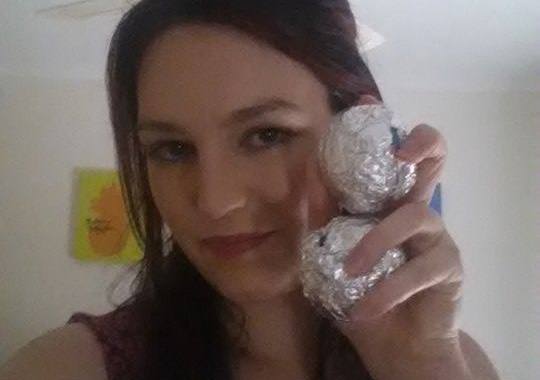 Halloween is once again just around the corner and like every year the pressure is on to come up with a unique costume that doesn’t break the bank. With that in mind, and not forgetting the fact that Halloween is supposed to be scary, may I present you my very own list of Adelaide themed Halloween Costumes on a (very tight) Budget!

Grab some balls, wrap em in alfoil and holy shit, you’re the most iconic location in Adelaide. The bigger the balls, the better – mine are small because I’m lazy.

Scare Factor: it all depends on how dirty yer balls are.

Second only to the balls, the pigs are surely the most regularly mounted attraction in the mall. Ensure that you get all the attention you deserve this all hallows eve – slut it up or play it down, the choice is totally yours.

Costume requirements: I used post-it notes because I am poor.

Scare Factor: Depends how much you embrace your inner-pig

It’s Adelaide. Apparently serial killers are everywhere. Mess with people even more, just come dressed like you do everyday.

Costume Requirements: None. Dress normally. Idiots will think you’re too lazy to bother with a costume, socially aware Adelaidians will know better. Feel free to add validity by hiding weapons (fake, of course) in your bag / car / dungeon – I mean basement.

Scare factor: watch Wolf Creek and Snow Town and then we can talk.

Uhm Can I Speak to the Manager? AKA The Burnside Mum

Spotted around the Eastern Suburbs but only in the right places, this woman is scary as fuck. You do not want to grow up to be her but you can take the piss out of her.

Costume requirements: You could fully commit and get one of those terrible hair-cuts or you could just use a wig. Incidentally this is the same wig I use to dress as Lady Gaga and ‘Pretty Woman’ so, y’know. Add a pearl necklace (the kind you can buy in a jewellery shop) for authenticity. I got mine from my ex-boyfriend. Incidentally he bought the same one for his mum which I feel says a lot about our relationship.

Scare factor: Have you ever worked in retail? These people are the stuff of nightmares.

Give up on life and you’re half way there. Add a flannelette shirt and you’re almost set…the final touch is forcibly removing a few teeth to complete the look.

Costume requirements: As above. You can only drink West End for the entire night, which probably isn’t the only downside of this costume…just, try to keep the racist comments to a minimum, okay?

Scare factor: petrifying to anyone who looks at you the wrong way…

Costume requirements: Stick a photo of your own face to the back of your head. Walk with pride. Also a name badge that says Hannah…or…Glenelg, I guess..

Scare factor: I guess this depends on whether people like seeing your face twice or if once is enough…

Look, I’m not a sporty person…so passionate sports fans kinda…scare me. They don’t even have to try but recently it’s gotten even worse; Crows fans can’t seem to let go of all the fact that some of their key players are leaving and they’re a bundle of emotion. Heart break and anger can do frighting things to a person, just one of the many reasons to be afraid of sports fans.

Costume requirements: Sports…stuff. Head to your local op shop for a cheap deal on Port Adelaide merch,as I’m sure many of their ‘true fans’ have jumped off the bandwagon after the season they had.

Scare factor: Did you see Twitter when they officially announced that Dangerfield was leaving?Have you ever sat in the members’ area when the wrong team is winning? I rest my case.

All of my friends…

Leaving Adelaide is just so…Adelaide. You find yourself in your 20s and suddenly there is no worse place to be than Adelaide – apparently. So everyone packs their bags and high tails the fuck out. It’s almost iconic.

Scare factor: Terrifying. Basically I just want my friends to stop abandoning me.